You are here: Home » What ASHS Offer » Timber » Douglas Fir

Douglas-fir wood is used for structural applications that are required to withstand high loads. It is used extensively in the construction industry. Other examples include its use for homebuilt aircraft such as the RJ.03 IBIS canard. Very often, these aircraft were designed to utilize Sitka spruce, which is becoming increasingly difficult to source in aviation quality grades. Oregon pine is also used in boat building when it is available in long, fairly knot-free lengths. Most timber now comes from plantation forests in North America which are managed to produce faster growing timber with fewer knots. This timber is generally lighter but weaker. Traditionally, Oregon pine was used in mast building due to its ablilty to resist bending loads without fracturing. This was based on using older native forest wood with a high number of growth rings per inch. This sort of wood is seldom available new but can be sourced fron merchants dealing in recycled timber. Native Oregon pine is considerably heavier than Sitka spruce, which is about the same weight as Western red cedar, but with far better bending characteristics than cedar. Large-sized Oregon pine, as used in beams, is inclined to split as it dries, like oak, but this does not reduce its strength.

Douglas-fir is one of the most commonly marketed Christmas tree species in the United States, where they are sold alongside firs like Noble Fir and Grand Fir. Douglas-fir Christmas trees are usually trimmed to a near perfect cone instead of left to grow naturally like Noble and Grand firs. 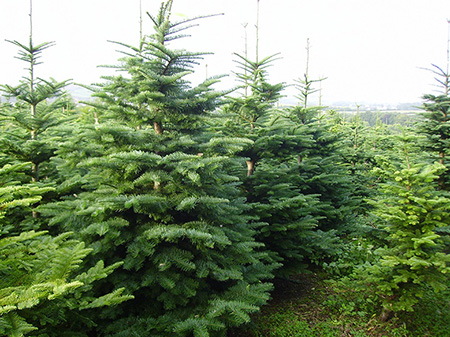