You are here: Home » What ASHS Offer » Timber » Sweet Chestnut

Uses  Sweet chestnut is a durable timber, and fairly easy to split and is therefore used extensively for poles and cleft fencing. Because it is very similar in appearance to oak, although without the silver figure, it has also been used as an alternative to oak for structural work and panelling. It can be used for both furniture and turnery.
Sweet Chestnut in Scotland  The oldest tree of any kind with a known planting date is a sweet chestnut growing near Strathpeffer, Easter Ross. It was planted in 1550 at Castle Leod, the seat of the Earls of Cromartie. Chestnut can be found in fairly big sections—lengths up to 4 metres, with widths of up to 450mm, but it isn't widely available. It grows up to 35 metres with a diameter of 1.5 metres. Stocks of Scottish sweet chestnut are low and variable, as it generally requires warmer summers to produce viable seed, and it's less common here than the horse chestnut.

Grain  Generally straight grained but can be spiral in older trees.
Strength  The timber has low bending strength—it's not good for bending, although it also has low stiffness—and low resistance to shock. Chestnut is similar in crushing strength to European beech.
Density  Sweet chestnut has a density of around 560kg per cubic metre.
Structure  The timber has a similar structure to oak—it's ring porous, with distinct growth rings, demarcated by pore ring of large early wood vessels. Late wood vessels are small and the parenchyma are indistinct and diffuse. Unlike oak, whose broad rays account for the silver figure on quarter sawn planks, chestnut has fine rays that are not particularly obvious.
Durability & Drying  Durable, occasionally damaged by pin hole borers; sapwood susceptible to lyctus and common furniture beetle. Sapwood and heartwood can be attacked by death watch beetle. Seasons slowly, liable to collapse and honeycombing.
Colour and Figure  Cream to yellowish brown, resembling oak, with pale sapwood. The contrast between early and late wood growth in the annual rings account for sweet chestnut's appearance. It has no other obvious and consistent distinguishing marks.
Working Properties  In most respects, chestnut is easy to work and has only a slight blunting effect on tools. It saws, machines, nails and glues satisfactorily. Chestnut also takes all finishing treatments satisfactorily. 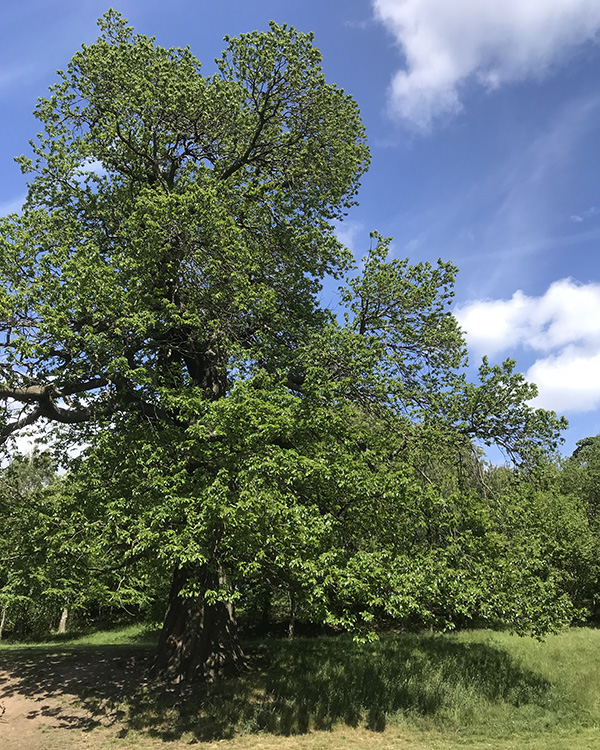 Looks and Leaves  Chestnut is a large broad crowned tree with fissured grey brown bark that in older trees often has fissures running spirally down the trunk. Its twigs are olive brown, and its buds in winter are 4-5mm long, plump and blunt. Chestnut has oblong, eliptical leaves that are between 10 and 25cm long, with a long-pointed tip, large regular sharply pointed marginal teeth, and a short leaf stalk. The leaves are hairless. The flowers are quite different from the spectacular flowers of the horse chestnut. Both male and female flowers are borne on the same tree. The male flowers are long and golden, obliquely erect and open in July. The female flowers are small green rosettes found at the base of unopen male flowers; the latter often open later and have a different aspect to earlier males.
Habitat  Sweet chestnut is uncommon in Scotland, as it prefers the warmer climate of southern England or continental Europe. It is found in rich, damp soils in sheltered places and is almost entirely from planted stock. It is quite shade tolerant and grows well as coppice understorey, although this type of woodland is rare in Scotland.
Ecological Value  The flowers provide an important source of nectar an pollen to bees and other insects, and red squirrels and jays eat the nuts. The leaves and nuts are fed on by many moth caterpillars.