You are here: Home » What ASHS Offer » Timber » Beech 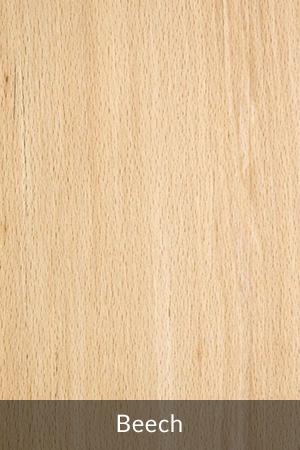 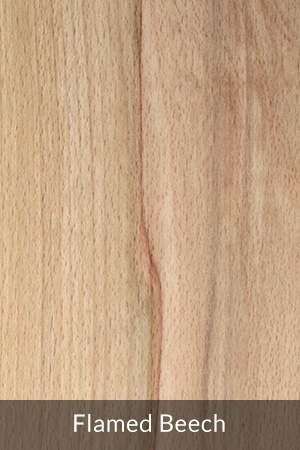 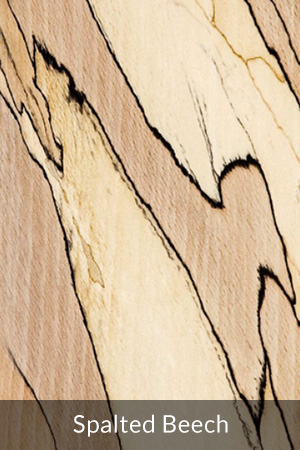 Uses  Widely used in furniture making, e.g., for making carcasses of chairs and couches; flooring, turning and for making domestic utensils, such as bread and cheeseboards.
Availability of Scottish Beech  Scottish beech is widely available, and most is of reasonable quality. It generally grows well in Scotland, particularly in the lowlands. Characterful spalted beech is also available.

Grain  Generally straight.
Strength  Beech is one of the strongest of homegrown timber, with medium bending strength, crushing strength and shock resistance.
Density  At 12% moisture content, the density of beech is 720kg/m3 (around the same as homegrown oak).
Structure  Obvious features of the timber include distinct growth rings and broad rays, which give beech its distinctive flecking. The rings are demarcated by a zone of fibres; pores are diffuse and parenchyma very small.
Durability & Drying  Perishable, susceptible to furniture beetle and occasionally pin-hole borers, but immune to lyctus infestation. Shrinks considerably in drying, but otherwise dries fairly well, with a tendency to check and split.
Colour and Figure  Beech is a pale creamy brown colour, with distinctive dark flecks; annual rings although visible do not result in a distinctive figure. In general, beech has a uniform appearance, with sapwood that can't be distinguished from heartwood. Steamed beech is a pale pink colour.
Working Properties  The working properties of beech vary according to where it's grown. Generally, it's a fairly dense timber, with corresponding moderate blunting effect. Beech glues well and also has excellent bending properties, which go a long way in explaining its popularity in chair manufacture. Machining and sawing generally satisfactory, with some tendency to burn on cross cutting and drilling. 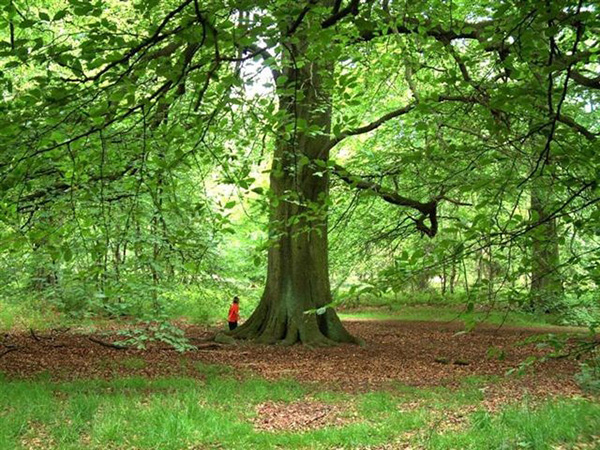 Looks & Leaves  Beech trees are broad crowned, deciduous, and can grow up to 40m tall, although they have shallow roots. Bark is thin smooth and grey. The leaves are elliptical and untoothed (smooth edged), 4-9cm long, fringed with silky hairs. When they first come out, they are a light, bright green, which darkens through the summer, turning nut brown in autumn. Winter buds are long and slender. Beech flowers in May and sheds its nuts in October. Seeds germinate in spring, with seed leaves a distinctive round shape. Young beech trees retain their dead leaves through the winter—leaves are also retained in a small conical zone on older trees, particularly obvious in old hedges.
Habitat  Beech will not grow on heavy clay or wet soils; the tree likes chalk and lime stone areas but will grow in open, well-drained soils of low pH. Its roots travel far, but tend not to reach any real depth. Beech seeds will germinate and grow under the shade of their parent, unlike any other native tree.
Ecological Value  Beech is not native to Scotland, having been introduced by the Romans or pre-Roman Britons. Because it has been planted widely and produces viable seed it has become a component of many broadleaved woodlands and is occasionally invasive in native woodlands.
Beech casts heavy shade and so discourages understorey and ground vegetation under its canopy.  However, early-flowering plants such as anemones, bluebells and primroses can do well beneath beech.
It is important for many butterflies and moths. The seeds are eaten by mice, voles, squirrels and birds.  Many fungi grow in beech woods including truffles. Dead beech trees and deadwood in the crown or on the ground provides habitats for hole-nesting birds and wood-boring insects as well as the birds and mammals that feed on them.