You are here: Home » What ASHS Offer » Timber » Alder

Uses  Comparatively light and soft, therefore good for turnery: used for broom and brush backs as well as rollers for textiles. Because it doesn't rot quickly when alternately wet and dry, it was used in mill clogs and some canal lock works. Was also used to make charcoal for gunpowder.
Availability of Scottish Alder  Although a reasonable amount of alder grows in the wetter areas of Scotland, it is not grown commercially and supplies vary. Available, but generally in small quantities with varying sizes.

Grain   Generally straight.
Strength   Alder has low bending strength, low stiffness, low resistance to shock, but medium crushing strength. It's similar in strength to lime - considerably less strong than European beech.
Density   Similar to lime, 530 kilograms per cubic metre at 12% moisture content.
Structure   Diffuse porous structure with a fine texture; broad rays visible as dark streaks in the timber.
Durability & Drying   Perishable and liable to attack by common furniture beetle. Dries well and fairly rapidly, with little tendency to warp.
Colour & Figure  Alder when first cut can be a rather intense shade of orange, but this fades over time until the timber is a light orange-brown colour. It has a fine texture; its most noticeable feature being the dark streaks (medullary rays) that occur throughout the timber. Tends to have quite a dull surface.
Working Properties  Generally good, dries well and finishes well. Sawing and machining satisfactory if cutting edges are kept sharp. Blunting is light, and nailing acceptable. Bending can be problematic, with a tendency for checks to occur on the ends of bends during setting. Glues and finishes well. 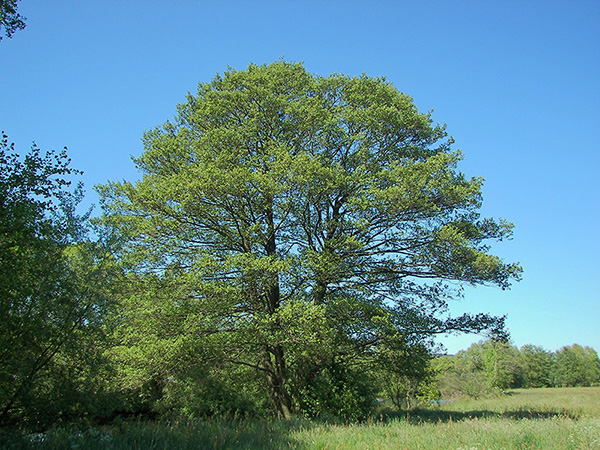 Looks & Leaves   Alder has a long trunk and narrow crown. Because it re-grows quickly when cut (it can be successfully coppiced), alder trees often have several "trunks" growing from the same base. In winter it has purplish, stalked buds: in summer simple dark green, round leaves that are irregularly toothed and flattish at the bottom. Alder also has early-falling stipules and separate male and female catkins borne on the same tree.
Habitat   Alder has a liking for water, and is commonly found along rivers and burns and in wet areas. In fact, alder seeds don't germinate well unless they are kept continually moist for about a month.
Ecological Value   Alder fixes nitrogen in its root nodules, giving it the ability to grow in poor soils. (Alder was one of the first trees to colonise Britain after the last Ice Age.) Alder can be planted to prevent erosion of river banks, as it produces a strong network of roots. Seeds are food for siskins, redpolls and goldfinches.